The Daily Stoic for February 27th. “Cultivating Indifference Where Others Grow Passion”

“Of all the things that are, some are good, others bad, and yet others indifferent. The good are virtues and all that share in them; the bad are the vices and all that indulge them; the indifferent lie in between virtue and vice and include wealth, health, life, death, pleasure, and pain.”
—EPICTETUS, DISCOURSES, 2.19.12b–13

Today’s stoic is kind of shocking for a XXI century audience. Notice how in the title, “indifference” is used as a positive term -something to cultivate- whereas “passion” is tagged as a negative word. That’s probably the exact opposite of how those terms are seen today.

The featured image above is an example. Note that “indifference” sits right between “hatred” and “envy”. However, specially in an entrepreneurial context, we are told over and over again to be passionate, to have passion, etc…

The Bonfire Of Vanities

Can you guys help me pick a filter? I don’t know if I should go with XX Pro or Valencia,
I wanna look tan. What should my caption be? I want it to be clever.
How about “Livin’ with my bitches, Hashtag live”
I only got 10 likes in the last 5 minutes. Do you think I should take it down?
Let me take another selfie
— The Chainsmokers, #Selfie.

We live in the bonfire of vanities. In my recent trip to Budapest, we visited one of the most famous spas of the city, the Géllert Spa. The experience was certainly disgusting for us due to the crowd that thronged every corner of the otherwise beautiful place.

There was a specially annoying teenage couple. They spent the whole time taking pictures for Instagram. Everywhere I went, there they were, their smartphones flashing while I tried to relax.

When I gave up and left the pools, I found a quiet, mysteriously solitary spot with loungers, and I lied down. Five minutes later, the couple arrived and after another endless photocall, they spent the rest of their visit uploading their pictures to Instagram and going through their timelines.

What annoyed me most was thinking that if their phones were stolen before leaving, they would have absolutely no memories about the place. Their glances never got away from their screens.

Are We Getting A Little Bit Ridiculous? 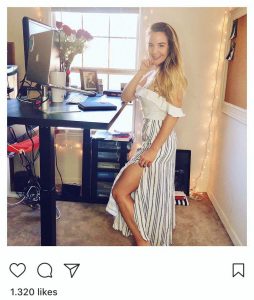 As you may know, while I try to stay away from social media, I do use it to publish content about my blog.

Yesterday, when uploading the daily stoic picture to Instagram, I got a comment from this girl at the left. I had a look at her profile and this was the first picture.

The caption reads: “What does being a developer mean to you?”. Then, this young lady goes into a long discussion about freedom, passion, and such.

Apart from the fact that this outfit is not precisely what I wear when I do some programming -the corset is too tight for me, and I only wax my legs on weekends- I found this completely comical.

I wondered if we live in such a transcendental frenzy today that everything needs to be inspiring, passionate, and … well, ridiculous.

Thus, this was my first thought today when reading the stoic passage.

Maybe we give some words a contextual meaning that is wrongly enforced by our society. Perhaps we need to be less passionate, inspirational, empowered and beautiful and just be ourselves for a moment. Maybe indifference is not such a bad word after all.

Baby You Are A Rich Man

Then my second thought when reading today’s passage was how strongly are our opinions tied to our social status or how easy or difficult our life has been.

Seneca was an incredibly wealthy, even famous, man—yet he was a Stoic. He had many material things, yet, as the Stoics say, he was also indifferent to them. He enjoyed them while they were there, but he accepted that they might someday disappear

While I’m not saying this isn’t true, I guess it’s easy to accept that your incredible wealth is going to disappear when that event is so unlikely it’s almost impossible. I have discussed before how in my view, Seneca’s opinion on wealth and the value of money was biased because of his social status.

After being ill for more than a week following our trip to Budapest, I can’t agree that health is something indifferent either.

So what about Epictetus? He was born a slave, and gained his hard-earned freedom after Nero’s death thanks to his education. His quote is very different:

Wealth consists not in having great possessions, but in having few wants. — Epictetus

This quote definitely resonates with me. Since I decluttered my life, and need less stuff, I’ve found out that the less I own, the happier I am.

Wow! Such a long Daily Stoic post. Today’s “Cultivating Indifference Where Others Grow Passion” really brought lots of different thoughts in my mind, from the ridiculousness of today’s vanity which is social media -specially Instagram- to how easy it’s to talk about indifference when you are a super wealthy man.